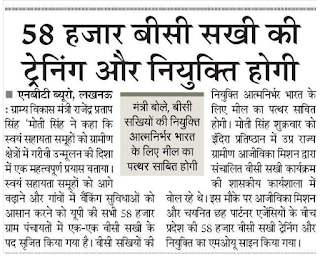 BC Sakhi Scheme (Banking Correnspendant Sakhi) has started by the State Government of Uttar Pradesh to give new opportunities to the women belong to Rural Area. The main job of Banking Sakhi is to deliver cash directly to the home without need to go outside for banking related issues.

Banking Sakhi will get Rs.4,000/Month with the commission as per the state government rule. The government has started the process to recruit 58,000 Posts for BC in this year and other updates will also be released as soon as possible.

Government also started the App for Banking Sakhi to get the easy access and details regarding the new updates, Candidates can download the same from here- Click Here (Candidates need to open this link in Android Phone).

We will add more updates regarding the recruitment process like Starting of online advertisement, closing date, age, qualification and many other updates also.