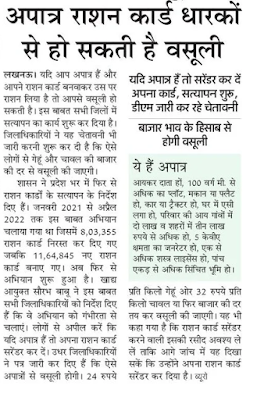 If you are not eligible for ration from government shops of UP and you have taken the benefits of this scheme than government will recover it from you at market price. UP Government has also started the verification process for this in different districts.

District Majistrate has also released warning to the peoples that if they will not surrendered their ration card than government will recover according to the market rate.

Recovery Rate of Ration from Ineligible Candidates: The recovery rate will be Rs.24/Kg for Wheat and Rs.32/Kg for Rice.

If candidate surrender their ration card than it's compulsory to take the receipt also for future purposes.