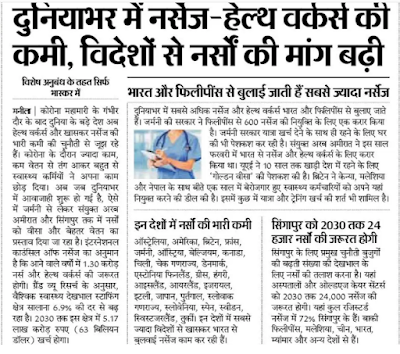 After Corono, Most of the countries are facing big problem in the field of Health and requires lots of Health Workers and Nurses. In the Corono Period, Due to low salary and more work many workers has leave their work. Now everything is working fine and peoples are travelling across countries easily, Germany to United Arab Emirates and Singapore is giving good proposal and high salary to Nurses.

According to the research of International Council of Nuses, More than 1.30 Crore Nurses and Health Workers will be require in the coming years. According to the Grand View Research, World Health Careing Staff is increasing as per the rate of 6.9% and more than Rs.5.17 Lakh Crore Rupees will be spend up to 2030.

Most Popular Country for Finding Health Staff is India and Philippines

In all over the world, most of the Nurses and Health Workers is called from India and Philippines. Germany's Government has recently done an agreement for the appointment of 600 Nurses with Philippines. The Government of Germany is giving Travel Allowances with House also.

United Arab Emirates has made an agreement with India in the Feb 2022. UAE also giving a proposal of 'Golden Visa' for living in the Hard Countries for 10 yrs. Britain is recruiting Unemployed Staff of previous 01 year from Kenya, Malaysia, Nepal and own country. In some of them also include Travel and Training spends.

The most common problem in the Singapore is increasing population of Old Age Persons and Health Department requires lots of staff for them. All hospitals and old age care centers requires 24,000 nurses upto 2030. Currently 72% nurses is local and other belongs to Philippines, Malaysia, China, India, Myanmar and other countries.