Showing posts with the label Air Force
Show all

Indian Air Force has celebrated its 90th Foundation Day on 8th Oct 2022 in Chandigarh. On Saturday, Air Force also get new Dress which is made of a special kind of fiber and Air Force's Operational Weapon Branch will be started also. This is happening first time after the independence of India. Central Government has given permission to start a new branch. This will reduce the cost of Training and it will save approx Rs.3400 Crore. This branch will maintain every weapons available in Air Force. Specially, it will play an important role in preserving 4 kinds of weapons, which are land to land working weapons, land to air working missiles, Flight control with Remote and Team basis Flight and Weapons. Vivek Ram Chaudhari, The Chief of the Air Staff of India has told that India is becoming Self-Independent by Make In India and we are becoming more powerful for any kind of situation in the future. More than 80 Fighter Planes has shown their talent in the show. Rafale, HAL Tejas, HAL Pra
Post a Comment
Read more 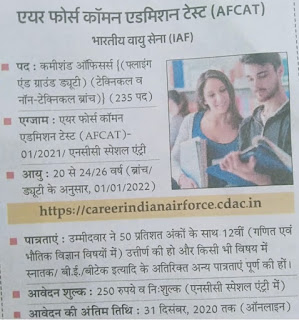