Showing posts with the label Jobs Updates
Show all 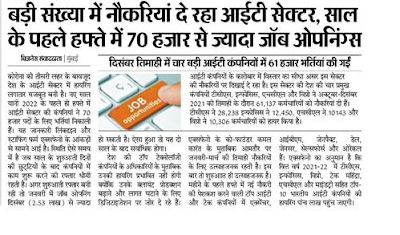 Despite the third wave of Corona, hiring in the country's IT sector has remained strong. In the first week of the new year i.e. 2022, IT sector companies have taken out recruitment for 70 thousand posts. This information has come out from data from LinkedIn and staffing firm Xpheno. The situation is at a time when the pace of starting work in companies is slow after the holidays of the initial days of the year. If the initial momentum continues, the job opening in January may be higher than that in December (2.53 lakh). If this happens, it will be the highest after two years. According to officials of the country's top technology companies, their hiring will not be affected as their clients are pushing for digitization to increase production and reduce costs. According to Kamal Karanth, co-founder of Xpheno, the January-March quarter is generally encouraging for jobs. This time the beginning is encouraging. The top IT and tech companies with new job offers in the first week o
Post a Comment
Read more
More posts