Showing posts with the label Latest Jobs News
Show all

1770+ Vacancies for JE, AE, Clerical Cadre and Various Others in UPPSC and UPSSSC 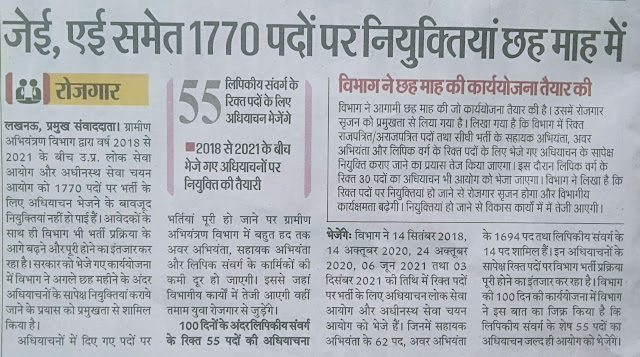 Uttar Pradesh Public Service Commission (UPPSC) and Uttar Pradesh Subordinate Services Selection Commission (UPSSSC) are going to recruit more than 1770+ posts of Junior Engineer, Assistant Engineer and various other Clerical Cadre Posts in 06 Months. The department has already declared that recruiting a large number of posts will make it easy to work faster in various departments of Uttar Pradesh. The department has started this recruitment process on the basis of the upcoming 06 months.  These vacancies are basically on the basis of requests sent between the years 2018- 2021. Within 100 days 55 posts requests of Clerical Cadre will be sent to the Departments.  UPPSC and UPSSSC have started working on it and also send the proposal to the State Government to recruit new staff as soon as possible. Official notification and other updates will be released, when new vacancies will be released by the departments. Candidates are advised to keep checking the official website of the Uttar Pr
Post a Comment
Read more
More posts