Showing posts with the label UPSESSB Recruitment
Show all 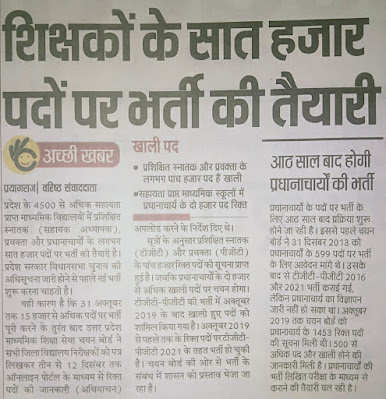 Uttar Pradesh Madhyamik Shiksha Sewa Chayan Board (UPSESSB) is going to recruit 7,000 Posts of TGT, PGT and Principal in more than 4500+ Government Aided Schools. UP Government wants to release the notification regarding the recruitment before the Election. There are a total of 5,000 Posts for TGT (Trained Graduate Teacher) and PGT (Post Graduate Teacher) and 2,000+ Posts for Principals in different Government Aided Schools/ Colleges. Recruitment on Principals Posts is starting after 8 years, before that department has released the recruitment for Principal posts on 31 December 2013 for 599 posts. After that TGT and PGT- 2016 and 2021 recruitment was conducted. But Principal recruitment was not started at that time, In October 2019 department has got information about 1453 posts of Principals and now the department has gotten information of more than 500 posts of Principal, So there are more than 2000 posts available of Principal. UPSESSB will soon release the other details like Qual
Post a Comment
Read more
More posts