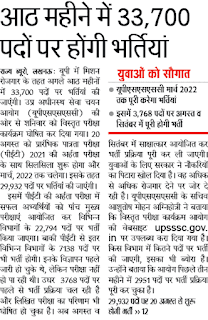 In UP, 33,700 posts will be recruited in the coming 8 months under Mission Rozgar. The detailed exam schedule has also been released by UPSSSC in this regard. This process will start from 20th August with Preliminary Eligibility Test (PET) which will run till March 2022. Under this, recruitment will be done on 29932 posts.

In this, successful candidates in the qualifying examination of PET will be recruited on 22794 posts in various departments by conducting 05 main examinations. Apart from PET, other 7138 posts will also be recruited. Advertisements in respect of these were already issued but the examination could not be conducted and at the same time, the process of recruitment is already going on for 3768 posts, the result of which has also been declared. Now the recruitment will be completed through interview in August or September.

UP Government focusing on releasing more jobs for unemployed persons in Uttar Pradesh. More details regarding the details of exam, post name, date of exam and other important updates, Candidates can check directly at the official website of UPSC by- Click Here