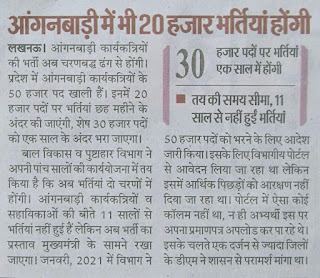 Uttar Pradesh government will now recruit Anganwadi posts on a systematic basis. Currently, 50,000 vacancies are empty in Uttar Pradesh. Department is going to recruit more than 20,000+ posts within 6 months and the remaining 30,000 posts will be recruited within the next 01 year.

The department has released the notification to recruit 50,000 vacancies of Anganwadi Workers and Assistant in January 2021. This process has been started on the Official Portal, but EWS category candidates were not getting reservation in this process and they are also unable to upload their certificates on the official website.