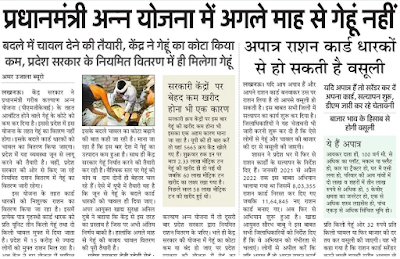 In this scheme, Ration Cardholders are getting free ration from government shops. In this scheme, every cardholder gets 3 kg wheat and 2 kg rice per unit. In many states, the wheat distribution quota is going to be closed or reduced as per the requirement and UP is also included in this.

It is believed that this time the production of wheat in the country has decreased. Simultaneously, the central government is preparing to export wheat. Globally, both its price and demand are going well. In such a situation, the preparation of the government is to give rice instead of wheat in Uttar Pradesh.

Minimum Purchase at Government Purchasing Centers: Currently, there is very low purchase at government purchasing centers and this is also a common factor of government is now give rice in the place of wheat.