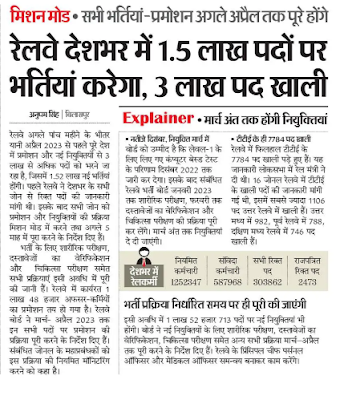 Indian Railways is going to recruit more than 3 lakhs posts through promotion and new vacancies, which will have 1.52 new vacancies in all over the India. Railway already collected information from all zones and now they are going to complete it within the next 5 months.

All steps like physical qualification, document verification and medical test will be completed in this time period. 1,48,000 employees working in Railway will now get the promotion before Apr 2023. Railway Recruitment Board has already given the order to complete the promotion process before March-April 2023. General Manager of all relevant zones has receievd order to monitior the enitre process also.

Board is planning to release result of Computer Based Test for Level-1 in Dec 2022. After that, the relevant Railway Recruitment Board will conduct the Physical Verification in Jan 2023 and document verification & medical test in Feb 2023. Candidates will be appointed before the end of March 2023.