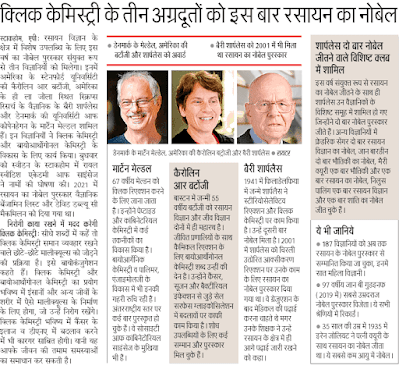 Noble Prize in the field of Chemistry was given to the 3 scientists. Which are Denmark's Morten P. Meldal, America's Stanford University Carolyn R. Bertozzi and Karl Barry Sharpless. All these scientists have done great work in the field of Click Chemistry and Bioorthogonal chemistry.

On Wednesday (05/10/2022), The Royal Swedish Academy Of Sciences' names has been announced in Stockholm.

Click Chemistry will also be useful in the treatment of Cancer and in making changes in the DNA. This will solve most problems of your life.

Basic Overview of the Scientists

Boston's Carolyn R. Bertozzi is an expert in Chemistry and Biology. For Living System and Chemical Reactions, Bioorthogonal Chemistry word is given by her. He has worked a lot on Cancer, swelling and bacterial infection related cell surface glycosylation. He has received many awards for her research in the field of Chemistry.

Karl Barry Sharpless was born in Philadelphia in 1941. He has done great work on stereoselective reaction and click chemistry. He has received Noble Prize 2nd Time. He wants to go in the medical field after completing his education but his Teacher suggest him to go in the field of Chemistry.

A total of 187 Scientists have achieved this award and 07 of them are Women.

American Scientist John Bannister Goodenough was the oldest person to receive this award at the age of 97 yrs in 2019.

Irène Joliot was the youngest person to receive this award along with his wife Curie at the age of 35 yrs in 1935.